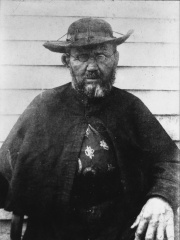 Father Damien or Saint Damien of Molokai, SS.CC. or Saint Damien De Veuster (Dutch: Pater Damiaan or Heilige Damiaan van Molokai; 3 January 1840 – 15 April 1889), born Jozef De Veuster, was a Roman Catholic priest from Belgium and member of the Congregation of the Sacred Hearts of Jesus and Mary, a missionary religious institute. He was recognized for his ministry, which he led from 1873 until his death in 1889, in the Kingdom of Hawaiʻi for people with leprosy (Hansen's disease), who lived in government-mandated medical quarantine in a settlement on the Kalaupapa Peninsula of Molokaʻi.During this time, he taught the Catholic faith to the people of Hawaii. Father Damien also cared for the patients and established leaders within the community to build houses, schools, roads, hospitals, and churches. Read more on Wikipedia

Father Damien is most famous for his work with lepers on the island of Molokai.

Among religious figures, Father Damien ranks 504 out of 2,238. Before him are Eric IX of Sweden, Jethro, Saint Marinus, Pope Eleutherius, Sabbas the Sanctified, and Josemaría Escrivá. After him are Ibn Hazm, Pope Victor I, Abdullah ibn Umar, Charles de Foucauld, Mary of Egypt, and Pope Nicholas II.

Among RELIGIOUS FIGURES In Belgium