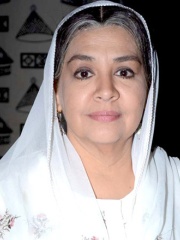 Farida Jalal (born 14 March 1949) is an Indian actress. In a film career spanning almost fifty years, Jalal acted in over 200 films in the Hindi, the Telugu, and the Tamil film industries. Best known for her character driven roles in independent cinema and supporting work in mainstream Bollywood productions, Jalal has received such accolades as four Filmfare Awards and two Bengal Film Journalists Association Awards.Jalal started her career with Taqdeer (1967). Read more on Wikipedia

Since 2007, the English Wikipedia page of Farida Jalal has received more than 2,243,846 page views. Her biography is available in 26 different languages on Wikipedia making her the 4,739th most popular actor.