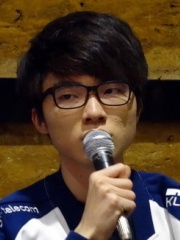 Lee Sang-hyeok (Korean: 이상혁; born May 7, 1996), better known as Faker (Korean: 페이커), is a South Korean professional League of Legends player for T1. Formerly known as GoJeonPa (Korean: 고전파) on the Korean server, he was picked up by LCK team SK Telecom T1 in 2013 and has played as the team's mid laner since. He is widely considered to be the best League of Legends player of all time.Lee is renowned for his high mechanical skill and extremely versatile champion pool. Read more on Wikipedia

Since 2007, the English Wikipedia page of Faker has received more than 59,309 page views. His biography is available in 16 different languages on Wikipedia. Faker is the 2nd most popular gamer, the 395th most popular biography from South Korea and the most popular South Korean Gamer.

Page views of Fakers by language

Among gamers, Faker ranks 2 out of 4. Before him are Ninja. After him are Feliks Zemdegs and Hong Jin-ho.

Most Popular Gamers in Wikipedia

Among GAMERS In South Korea