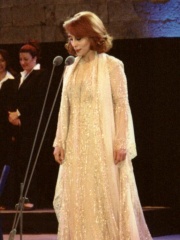 Nouhad Wadie' Haddad (Arabic: نهاد وديع حداد, Lebanese Arabic pronunciation: [nʊhæːd wædiːʕ ħædːæːd]; born November 21, 1934), known as Fairuz (Arabic: فيروز, Arabic pronunciation: [fajruːz]; also spelled Fairouz, Feyrouz or Fayrouz), is a Lebanese singer. She is considered by many as one of the leading vocalists and most famous singers in the history of the Arab world. Fairuz is considered the musical icon of Lebanon and is popularly known as "the soul of Lebanon".Fairuz began her musical career as a teenager at the national radio station in Lebanon in the late 1940s as a chorus member. Read more on Wikipedia

Fairuz is most famous for her voice and singing style.

Page views of Fairuzs by language

Among SINGERS In Lebanon