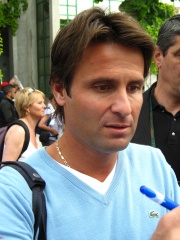 Fabrice Vetea Santoro (born 9 December 1972) is a French retired tennis player from Tahiti. Successful in both singles and doubles, he had an unusually long professional career, with many of his accomplishments coming toward the end of his career, and he is popular among spectators and other players alike for his winning demeanor and shot-making abilities; he is also one of a rare breed of player who plays two-handed on both the forehand and backhand sides. Owing to his longevity on the tour and consistent ranking, Santoro holds several ATP records: the most career wins over top ten opponents for a player who never reached the top ten (40), and the third-most appearances in singles competition at Grand Slam events behind Roger Federer and Feliciano López (70). Read more on Wikipedia

Since 2007, the English Wikipedia page of Fabrice Santoro has received more than 272,640 page views. His biography is available in 27 different languages on Wikipedia making him the 264th most popular tennis player.

Others born in French Polynesia

Among TENNIS PLAYERS In French Polynesia