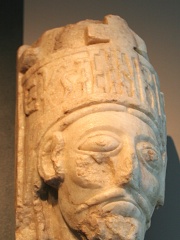 Eystein I of Norway

Eystein Magnusson (Old Norse: Eysteinn Magnússon, Norwegian: Øystein Magnusson; c. 1088 – 29 August 1123) was King of Norway (as Eystein I) from 1103 to 1123 together with his brothers Sigurd the Crusader and Olaf Magnusson, although since Olaf died before adulthood, only Eystein and Sigurd were effective rulers of the country. While Sigurd gained fame as the "warrior king" (although owed almost exclusively to his three-year crusade to the Holy Land), Eystein was in contrast portrayed in the sagas as the "peace king" who stayed home in Norway and improved the country. Read more on Wikipedia

Page views of Eystein I of Norways by language

Among politicians, Eystein I of Norway ranks 5,056 out of 15,710. Before him are Emperor Yūryaku, Suintila, Aleksandar Stamboliyski, Ny-Hor, Haakon Ericsson, and Moncef Marzouki. After him are László Csatáry, Reginald Johnston, Sheikh Hasina, Karl Nesselrode, Khayu, and Gaius Marius the Younger.