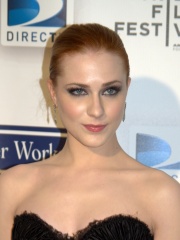 Evan Rachel Wood (born September 7, 1987) is an American actress and activist. She is the recipient of a Critics' Choice Television Award as well as three Primetime Emmy Award nominations and three Golden Globe Award nominations for her work in film and television. Wood began acting in the 1990s, appearing in several television series, including American Gothic (1995–96) and Once and Again (1999–2002). Read more on Wikipedia

The A.V. Club
Evan Rachel Wood previews her mean Madonna impression ahead of the "Weird Al" Yankovic biopic
Madonna bootcamp may be over, but (presumably) Julia Garner’s road to being the best onscreen Madonna now has an Evan Rachel Wood-shaped barrier. Read more...
Hattie Lindert
Egotastic.com
Evan Rachel Wood Does Her Madonna Impression!
Evan Rachel Wood is on her promo tour for the upcoming season of the HBO series Westworld and that means she’s made her way over to The Tonight Show with Jimmy Fallon. The actress spoke about the new season, which has her playing a new role as a character cal…
Echo Lawrence
Just Jared
Evan Rachel Wood Delivers Amazing Cover of Madonna's 'Material Girl' on 'The Tonight Show'
Evan Rachel Wood is showing off her vocal chops on The Tonight Show! The 34-year-old actress, who appeared on the late night program to chat about the new season of Westworld, also opened up about her role as Madonna in the upcoming Weird Al Yankovic biopic. …
Just Jared
Vulture
Evan Rachel Wood Previews Her Madonna-pression for Upcoming Weird Al Biopic
Jimmy Fallon also made her do Alanis and Janis, and it was all definitely unplanned.
Jason P. Frank