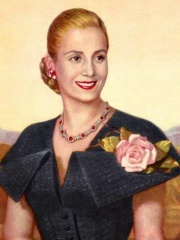 María Eva Duarte (7 May 1919 – 26 July 1952), better known as María Eva Duarte de Perón, Eva Perón and Evita, was the wife of Argentine President Juan Perón (1895–1974) and First Lady of Argentina from 1946 until her death in 1952. She was born in poverty in the rural village of Los Toldos, in the Pampas, as the youngest of five children. At 15 in 1934, she moved to the nation's capital of Buenos Aires to pursue a career as a stage, radio, and film actress. Read more on Wikipedia

Since 2007, the English Wikipedia page of Eva Perón has received more than 5,585,996 page views. Her biography is available in 87 different languages on Wikipedia making her the 201st most popular politician.

Among politicians, Eva Perón ranks 199 out of 14,801. Before her are Suleiman II, Harald V of Norway, Frederick the Great, Leonidas I, Enver Hoxha, and Henry II of France. After her are Harald Fairhair, Anwar Sadat, Slobodan Milošević, Victor Emmanuel II of Italy, Klemens von Metternich, and Louis XII of France.