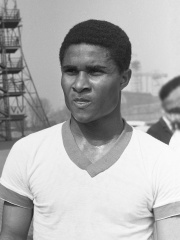 Eusébio da Silva Ferreira GCIH GCM (European Portuguese: [ewˈzɛβju ðɐ ˈsiɫvɐ fɨˈʁɐjɾɐ]; 25 January 1942 – 5 January 2014) was a Mozambican-born Portuguese footballer who played as a striker. Eusébio is considered by many as one of the greatest footballers of all time. During his professional career, he scored 733 goals in 745 matches (41 goals in 64 matches for Portugal). Read more on Wikipedia

Since 2007, the English Wikipedia page of Eusébio has received more than 2,053,365 page views. His biography is available in 82 different languages on Wikipedia (up from 81 in 2019). Eusébio is the 5th most popular soccer player, the most popular biography from Mozambique and the most popular Mozambican Soccer Player.

Eusébio was a Portuguese football player who is most famous for being the first person to score one hundred goals in the European Cup.

Page views of Eusébios by language

Among soccer players, Eusébio ranks 5 out of 16,923. Before him are Pelé, Johan Cruyff, Ferenc Puskás, and Garrincha. After him are Alfredo Di Stéfano, Franz Beckenbauer, Gerd Müller, Diego Maradona, Lev Yashin, Giuseppe Meazza, and Zinedine Zidane.

Among SOCCER PLAYERS In Mozambique