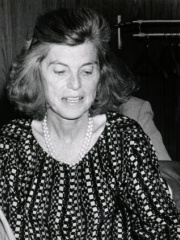 Eunice Mary Kennedy Shriver (July 10, 1921 – August 11, 2009) was an American philanthropist and a member of the Kennedy family. She was the founder of the Special Olympics, a sports organization for persons with physical and intellectual disabilities. For her efforts on behalf of the disabled, Shriver was awarded the Presidential Medal of Freedom in 1984. She was a sister of U.S. President John F. Kennedy, U.S. Senators Robert F. Kennedy and Edward Kennedy, Rosemary Kennedy, and U.S. Read more on Wikipedia

Among politicians, Eunice Kennedy Shriver ranks 6,733 out of 15,710. Before her are Peter Mutharika, Emperor Cheng of Jin, Wilhelm Marr, Manuel Fraga, Odo III, Duke of Burgundy, and David Sassoli. After her are Mikołaj "the Red" Radziwiłł, Masayoshi Ōhira, Prince Carl Bernadotte, Roman of Bulgaria, George William, Duke of Brunswick-Lüneburg, and Moshoeshoe II of Lesotho.