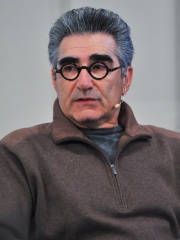 Eugene Levy CM (born December 17, 1946) is a Canadian actor, comedian, producer, director, and writer. From 1976 until 1984, he appeared in the Canadian television sketch comedy series SCTV , and in the American Pie (film series). He often plays flustered and unconventional figures. Read more on Wikipedia

Since 2007, the English Wikipedia page of Eugene Levy has received more than 7,824,601 page views. His biography is available in 31 different languages on Wikipedia making him the 2,320th most popular actor.

Among actors, Eugene Levy ranks 2,290 out of 8,832. Before him are Anthony Franciosa, Michael Richards, John Terry, Ferdinand Raimund, Madeleine Renaud, and Harry Langdon. After him are Clive Swift, Lena Nyman, Lesley-Anne Down, Lauren Graham, Robert Foxworth, and Mike Connors.