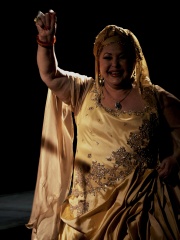 Esma Redžepova-Teodosievska (Macedonian: Есма Реџепова-Теодосиевска; Macedonian pronunciation: [ˈɛsma rɛˈd͡ʒɛpɔva tɛɔdɔˈsiɛfska]; 8 August 1943 – 11 December 2016) was a Macedonian vocalist, songwriter, and humanitarian of Romani ethnicity. Because of her prolific repertoire, which included hundreds of songs, and because of her contribution to Roma culture and its promotion, she was nicknamed Queen of the Gypsies.She started to sing while she was a teenager in the 1950s, and her career spans over five decades. Her musical success was closely linked to her marriage with Stevo Teodosievski, who was a composer, arranger and director of a musical ensemble, the Ansambl Teodosievski. Read more on Wikipedia

Since 2007, the English Wikipedia page of Esma Redžepova has received more than 225,500 page views. Her biography is available in 38 different languages on Wikipedia making her the 183rd most popular singer.

Among SINGERS In North Macedonia