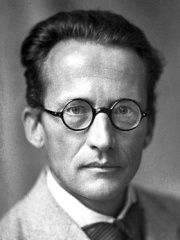 Erwin Rudolf Josef Alexander Schrödinger (UK: , US: ; German: [ˈɛɐ̯viːn ˈʃʁøːdɪŋɐ]; 12 August 1887 – 4 January 1961), sometimes written as Erwin Schrodinger or Erwin Schroedinger, was a Nobel Prize-winning Austrian-Irish physicist who developed a number of fundamental results in quantum theory: the Schrödinger equation provides a way to calculate the wave function of a system and how it changes dynamically in time. In addition, he was the author of many works on various aspects of physics: statistical mechanics and thermodynamics, physics of dielectrics, colour theory, electrodynamics, general relativity, and cosmology, and he made several attempts to construct a unified field theory. Read more on Wikipedia

Erwin Schrödinger was a physicist who formulated the Schrödinger equation, which is used to describe the behavior of quantum particles.

Among people born in 1887, Erwin Schrödinger ranks 4. Before him are Le Corbusier, Chiang Kai-shek, and Marc Chagall. After him are Marcel Duchamp, Charles I of Austria, Srinivasa Ramanujan, Erich von Manstein, Ernst Röhm, Padre Pio, Bernard Montgomery, and Vidkun Quisling. Among people deceased in 1961, Erwin Schrödinger ranks 3. Before him are Ernest Hemingway and Carl Jung. After him are Dag Hammarskjöld, Patrice Lumumba, Louis-Ferdinand Céline, Gary Cooper, Maurice Merleau-Ponty, Zog I of Albania, Jules Bordet, Rafael Trujillo, and Emily Greene Balch.

Among PHYSICISTS In Austria