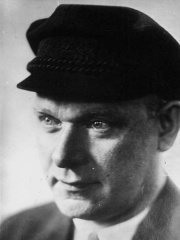 Ernst Johannes Fritz Thälmann (16 April 1886 – 18 August 1944) was a German communist politician, and leader of the Communist Party of Germany (KPD) from 1925 to 1933. A committed Stalinist, Thälmann played a major role during the political instability of the Weimar Republic, especially in its final years, when the KPD explicitly sought to overthrow the liberal democracy of the republic. Under his leadership the KPD became intimately associated with the government of the Soviet Union and the policies of Joseph Stalin, and from 1928 the party was largely controlled and funded by Stalin's government. Read more on Wikipedia

Since 2007, the English Wikipedia page of Ernst Thälmann has received more than 534,433 page views. His biography is available in 45 different languages on Wikipedia making him the 1,292nd most popular politician.

Among politicians, Ernst Thälmann ranks 1,286 out of 14,801. Before him are Zog I of Albania, Wenceslaus II of Bohemia, Franklin Pierce, Muawiya II, Pyotr Stolypin, and Claudia Octavia. After him are George II of Greece, Sunjong of Korea, Francis II Rákóczi, Khalifa bin Zayed Al Nahyan, Zayed bin Sultan Al Nahyan, and Igor of Kiev.