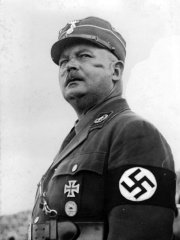 Ernst Julius Günther Röhm (German: [ˈɛɐ̯nst ˈʁøːm]; 28 November 1887 – 1 July 1934) was a German military officer and an early member of the Nazi Party. As one of the members of its predecessor, the German Workers' Party, he was a close friend and early ally of Adolf Hitler and a co-founder of the Sturmabteilung (SA, "Storm Battalion"), the Nazi Party's militia, and later was its commander. Read more on Wikipedia

Since 2007, the English Wikipedia page of Ernst Röhm has received more than 2,403,727 page views. His biography is available in 53 different languages on Wikipedia making him the 37th most popular military personnel.

Among people born in 1887, Ernst Röhm ranks 9. Before him are Marc Chagall, Erwin Schrödinger, Marcel Duchamp, Erich von Manstein, Charles I of Austria, and Srinivasa Ramanujan. After him are Padre Pio, Bernard Montgomery, Gustav Ludwig Hertz, Wilhelm Canaris, Vidkun Quisling, and Arthur Rubinstein. Among people deceased in 1934, Ernst Röhm ranks 6. Before him are Marie Curie, Paul von Hindenburg, Lev Vygotsky, Edward Elgar, and Fritz Haber. After him are Alexander I of Yugoslavia, Albert I of Belgium, Raymond Poincaré, Kurt von Schleicher, Sergey Kirov, and Engelbert Dollfuss.