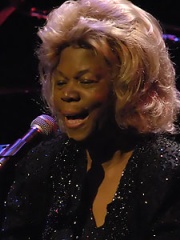 Ernestine Anderson (November 11, 1928 – March 10, 2016) was an American jazz and blues singer. In a career spanning more than six decades, she recorded over 30 albums. She was nominated four times for a Grammy Award. Read more on Wikipedia

Since 2007, the English Wikipedia page of Ernestine Anderson has received more than 99,320 page views. Her biography is available in 16 different languages on Wikipedia making her the 1,694th most popular singer.