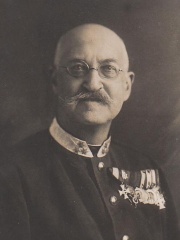 Ernest Augustus, Crown Prince of Hanover, 3rd Duke of Cumberland and Teviotdale (German: Ernst August; 21 September 1845 – 14 November 1923), was the eldest child and only son of George V of Hanover and his wife, Marie of Saxe-Altenburg. Ernest Augustus was deprived of the thrones of Hanover upon its annexation by Prussia in 1866 and later the Duchy of Brunswick in 1884. Although he was the senior male-line great-grandson of George III, the Duke of Cumberland was deprived of his British peerages and honours for having sided with Germany in World War I. Ernest Augustus was the last Hanoverian prince to hold a British royal title and the Order of the Garter. Read more on Wikipedia

Among noblemen, Ernest Augustus, Crown Prince of Hanover ranks 291 out of 843. Before him are Prince Yasuhiko Asaka, Anne Geneviève de Bourbon, Duchess Helene of Mecklenburg-Schwerin, Gaston IV, Count of Foix, Robert II, Count of Artois, and John Casimir, Count Palatine of Kleeburg. After him are Maximilian, Duke of Hohenberg, Prince Michael of Kent, Gioffre Borgia, Grand Duchess Kira Kirillovna of Russia, Philibert I, Duke of Savoy, and Duke Maximilian Emanuel in Bavaria.

Among noblemen born in Germany, Ernest Augustus, Crown Prince of Hanover ranks 42. Before him are George, Duke of Saxony (1471), Frederick II Eugene, Duke of Württemberg (1732), Princess Sophie of Saxony (1845), Christian Albert, Duke of Holstein-Gottorp (1641), Duchess Helene of Mecklenburg-Schwerin (1814), and John Casimir, Count Palatine of Kleeburg (1589). After him are Duke Maximilian Emanuel in Bavaria (1849), Albrecht, Duke of Bavaria (1905), Princess Louise Margaret of Prussia (1860), Frederica of Mecklenburg-Strelitz (1778), Johann II, Duke of Saxe-Weimar (1570), and Elizabeth Charlotte of the Palatinate, Electress of Brandenburg (1597).