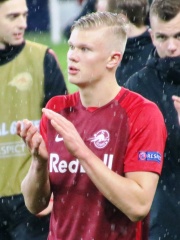 Erling Braut Haaland (né Håland [ˈhôːlɑn]; born 21 July 2000) is a Norwegian professional footballer who plays as a striker for German Bundesliga club Borussia Dortmund and the Norway national team. A prolific goalscorer, Haaland is recognised for his pace, athleticism and finishing ability, earning him the nickname "The Terminator" by many of his admirers. He is considered one of the best strikers in world football.Haaland started his career at his hometown club Bryne in 2016, and moved to Molde the following year; he spent two seasons with the club before signing with Austrian side Red Bull Salzburg in January 2019. Read more on Wikipedia