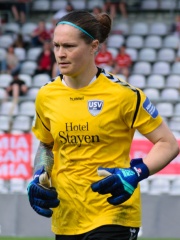 Erin Katrina McLeod (born February 26, 1983) is a Canadian soccer player who plays as a goalkeeper for Stjarnan in the Icelandic Úrvalsdeild, on loan from NWSL club Orlando Pride, and has represented Canada internationally. She first appeared for the Canada women's national soccer team at the 2002 Algarve Cup and has since made 118 appearances for the team. In 2012, as part of the Canadian Soccer Association's Centennial Celebration, she was honoured on the All-Time Canada XI women's team.McLeod has represented Canada in four FIFA Women's World Cups: 2003 in the US, 2007 in China, 2011 in Germany and 2015 in Canada. Read more on Wikipedia

Since 2007, the English Wikipedia page of Erin McLeod has received more than 164,278 page views. Her biography is available in 15 different languages on Wikipedia making her the 11,025th most popular soccer player.

Among SOCCER PLAYERS In Canada