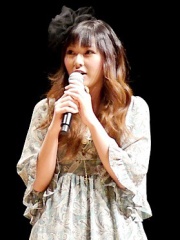 Eri Kitamura (喜多村 英梨, Kitamura Eri, born August 16, 1987) is a Japanese voice actress and singer. She was previously affiliated with Early Wing, but is now a freelancer. She is known for voicing prominent roles in anime such as Cana Alberona and Aquarius in Fairy Tail, Jessica Kaios in Little Battlers Experience W, Karen Araragi in Monogatari, Ranko Honjō in My First Girlfriend Is a Gal, Yuka Mochida in Corpse Party, Kirika Ueno in C3, Miki Aono/Cure Berry in Fresh Pretty Cure!, and Sayaka Miki in Puella Magi Madoka Magica. In addition, she provided the voice for Vocaloid CUL-REBIRTH. Read more on Wikipedia

Since 2007, the English Wikipedia page of Eri Kitamura has received more than 389,033 page views. Her biography is available in 18 different languages on Wikipedia making her the 7,292nd most popular actor.