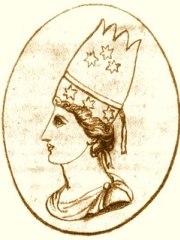 Erato also known as Queen Erato (flourished second half of 1st century BC & first half of 1st century, died sometime after 12) was a princess of the Kingdom of Armenia and member of the Artaxiad Dynasty. She served as Roman client queen of Armenia from 10 BC until 2 BC with her brother-husband King Tigranes IV. After living in political exile for a number of years, she co-ruled as Roman client queen of Armenia from 6 until 12 with the Herodian Prince Tigranes V, her distant paternal relative. Read more on Wikipedia

Page views of Erato of Armenias by language

Among politicians, Erato of Armenia ranks 8,936 out of 15,710. Before her are Hassan Diab, Yaakov Dori, Princess Maria da Glória, Duchess of Segorbe, Poul Hartling, Ivica Račan, and Rodrigo Borja Cevallos. After her are Princess Elizabeth of Greece and Denmark, Hyon Yong-chol, Nebiryraw I, Agostino Depretis, Andrei Bubnov, and Aemilia Lepida.