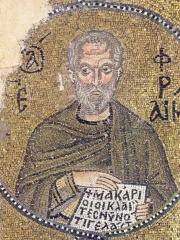 Ephrem the Syrian (Classical Syriac: ܡܪܝ ܐܦܪܝܡ ܣܘܪܝܝܐ, romanized: Mār ʾAp̄rêm Sūryāyā, Classical Syriac pronunciation: [mɑr ʔafˈrem surˈjɑjɑ]; Koinē Greek: Ἐφραὶμ ὁ Σῦρος, romanized: Efrém o Sýros; Latin: Ephraem Syrus; Amharic: ቅዱስ ኤፍሬም ሶርያዊ; c. 306 – 373), also known as Saint Ephrem, Saint Ephraim, Ephrem of Edessa or Aprem of Nisibis, was a prominent Christian theologian and writer, who is revered as one of the most notable hymnographers of Eastern Christianity. He was born in Nisibis, served as a deacon and later lived in Edessa.Ephrem is venerated as a saint by all traditional Churches. He is especially revered in Syriac Christianity, both in East Syriac tradition and West Syriac tradition, and also counted as a Venerable Father (i.e., a sainted Monk) in the Eastern Orthodox Church. Read more on Wikipedia

Ephrem the Syrian is most famous for his hymns and poetry. He was a poet, theologian, and a preacher.

Page views of Ephrem the Syrians by language

Among religious figures, Ephrem the Syrian ranks 331 out of 2,238. Before him are Pope Leo IV, Ubba, Pope Martin I, Sabbatai Zevi, Pope Nicholas IV, and Pope Damasus II. After him are James, son of Alphaeus, Barabbas, Philip Neri, Pope Eugene I, Pope Benedict I, and Pope Eutychian.