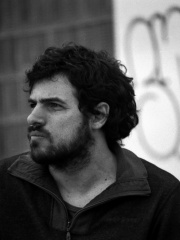 Enric Duran Giralt (born 23 April 1976, Vilanova i la Geltrú) also known as Robin Banks or the Robin Hood of the Banks is a Catalan anticapitalist activist and a founding member of the Catalan Integral Cooperative (CIC - Cooperativa Integral Catalana) and Faircoop.On September 17, 2008, he publicly announced that he had 'robbed' dozens of Spanish banks of nearly half a million euros as part of a political action to denounce what he termed the predatory capitalist system. From 2006 to 2008, Duran took out 68 commercial and personal loans from a total of 39 banks with no guarantees or property as collateral. He had no intention of repaying the debts, and used the money to finance various anti-capitalist movements. Read more on Wikipedia

Among SOCIAL ACTIVISTS In Spain

Among social activists born in Spain, Enric Duran ranks 3. Before her are Buenaventura Durruti (1896) and Salvador Puig Antich (1948).