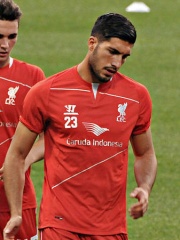 Emre Can (Turkish pronunciation: [ˈemɾe ˈdʒan]; born 12 January 1994) is a German professional footballer who plays as a central midfielder for Bundesliga club Borussia Dortmund and the Germany national team. A versatile player, Can can also play as a defensive midfielder, centre-back and full-back. He began his senior career at Bayern Munich, playing mostly in the club's reserve side before his 2013 transfer to Bayer Leverkusen. Read more on Wikipedia

Among soccer players, Emre Can ranks 2,768 out of 16,880. Before him are David Pegg, Tarak Dhiab, Andriy Voronin, Philippe Clement, Katsuyoshi Kuwahara, and Sverre Hansen. After him are Ramires, Teóphilo Bettencourt Pereira, Piermario Morosini, Luigi Radice, Michy Batshuayi, and Nordin Amrabat.