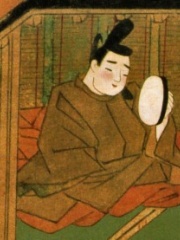 Emperor Yōmei (用明天皇, Yōmei-tennō, 540-21 May 587) was the 31st Emperor of Japan, according to the traditional order of succession.Yōmei's reign spanned the years from 585 until his death in 587. Read more on Wikipedia

Since 2007, the English Wikipedia page of Emperor Yōmei has received more than 94,257 page views. His biography is available in 29 different languages on Wikipedia making him the 3,916th most popular politician.

Among politicians, Emperor Yōmei ranks 3,893 out of 14,801. Before him are Richard I of Normandy, Masahito, Prince Hitachi, Ptolemy of Aloros, Rudolf II, Duke of Austria, Infanta Marie Anne of Portugal, and Aristides Pereira. After him are Ingvar Carlsson, Zhelyu Zhelev, Emperor Go-Shirakawa, Aaron Burr, Archduchess Eleanor of Austria, and Artaphernes.