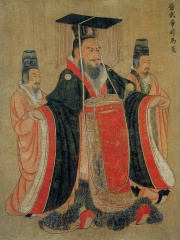 Emperor Wu of Jin (simplified Chinese: 晋武帝; traditional Chinese: 晉武帝; pinyin: Jìn Wǔ Dì; Wade–Giles: Chin Wu-Ti; 236 – 16 May 290), personal name Sima Yan (Chinese: 司馬炎; pinyin: Sīmǎ Yán), courtesy name Anshi (安世), was the grandson of Sima Yi, nephew of Sima Shi and son of Sima Zhao. He became the first emperor of the Jin dynasty after forcing Cao Huan, last emperor of the state of Cao Wei, to abdicate to him. He reigned from 266 to 290, and after conquering the state of Eastern Wu in 280, was the emperor of a reunified China. Read more on Wikipedia

Emperor Wu of Jin was most famous for his military conquests and his efforts to unify China.

Page views of Emperor Wu of Jins by language

Among politicians, Emperor Wu of Jin ranks 1,027 out of 15,710. Before him are Sebastian of Portugal, Mohammad Mosaddegh, Cleopatra Selene II, Édouard Daladier, Agrippina the Elder, and Demetrius I of Macedon. After him are Richard Cromwell, Zachary Taylor, Jalal Talabani, Probus, Abdullah I of Jordan, and 5th Dalai Lama.