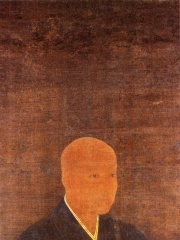 Emperor Kōgon (光厳天皇, Kōgon-tennō, August 1, 1313 – August 5, 1364) was the first of the Emperors of Northern Court during the Period of the Northern and Southern Courts in Japan. Read more on Wikipedia

Since 2007, the English Wikipedia page of Emperor Kōgon has received more than 68,451 page views. His biography is available in 23 different languages on Wikipedia. Emperor Kōgon is the 6,742nd most popular politician (down from 5,434th in 2019).

Among politicians, Emperor Kōgon ranks 6,742 out of 15,710. Before him are Prince Carl Bernadotte, Roman of Bulgaria, George William, Duke of Brunswick-Lüneburg, Moshoeshoe II of Lesotho, Gertrud Scholtz-Klink, and Emile Vandervelde. After him are Pascoal Ranieri Mazzilli, Fiorello H. La Guardia, Theopompus of Sparta, Argishti II, Julius Dorpmüller, and Bernard VII, Count of Armagnac.

Among people born in 1313, Emperor Kōgon ranks 6. Before him are Giovanni Boccaccio, Cola di Rienzo, Bartolus de Saxoferrato, Maria of Portugal, Queen of Castile, and Ibn al-Khatib. After him are Isabella of Valois, Duchess of Bourbon and Constantine III, King of Armenia. Among people deceased in 1364, Emperor Kōgon ranks 7. Before him are John II of France, Valdemar III of Denmark, Gajah Mada, Charles, Duke of Brittany, Edward Balliol, and Agnes of Austria. After him are Robert, Prince of Taranto, Elisenda of Montcada, Nicholas Alexander of Wallachia, and Longchenpa.