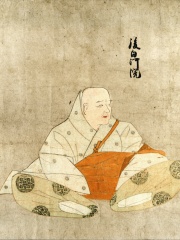 Emperor Go-Shirakawa (後白河天皇, Go-Shirakawa-tennō, October 18, 1127 – April 26, 1192) was the 77th emperor of Japan, according to the traditional order of succession. His de jure reign spanned the years from 1155 through 1158, though arguably he effectively maintained imperial power for almost thirty-seven years through the insei system – scholars differ as to whether his rule can be truly considered part of the insei system, given that the Hōgen Rebellion undermined the imperial position. Read more on Wikipedia

Among politicians, Emperor Go-Shirakawa ranks 4,739 out of 15,577. Before him are Fernando de la Rúa, Amenemnisu, Tassilo III, Duke of Bavaria, Antonín Zápotocký, Petru Rareș, and Ordoño I of Asturias. After him are Peter von Biron, Al-Mu'tadid, Pim Fortuyn, Binali Yıldırım, Maria of Montferrat, and Franz Walter Stahlecker.

Among people born in 1127, Emperor Go-Shirakawa ranks 4. Before him are Constance of Antioch, Emperor Xiaozong of Song, and Henry I, Count of Champagne. After him are Felix of Valois, Uijong of Goryeo, and Bolesław I the Tall. Among people deceased in 1192, Emperor Go-Shirakawa ranks 4. Before him are Conrad of Montferrat, Kilij Arslan II, and Rashid ad-Din Sinan. After him are Hugh III, Duke of Burgundy, Garnier de Nablus, Wenceslaus II, Duke of Bohemia, Adam of Saint Victor, and Orio Mastropiero.