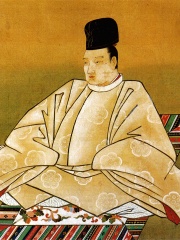 Emperor Go-Sai (後西天皇, Go-Sai-tennō, January 1, 1638 – March 22, 1685), also known as Emperor Go-Saiin (後西院天皇, Go-Saiin-tennō), was the 111th emperor of Japan, according to the traditional order of succession.Go-Sai's reign spanned the years from 1655 through 1663.This 17th-century sovereign was named after the 9th-century Emperor Junna and go- (後), translates as later, and thus, he could have been called the "Later Emperor Junna". Emperor Go-Sai could not pass the throne onto his descendants. For this reason, he was known as the Go-Saiin emperor, after an alternate name of Emperor Junna, who had confronted and reached an accommodation with similar issues. Read more on Wikipedia

Emperor Go-sai is most famous for his decision to abandon Kyoto and the imperial court in order to set up a new capital in Tokyo, which was then called Edo. This decision was made after the Great Fire of Meireki in 1657.

Among politicians, Emperor Go-Sai ranks 2,631 out of 15,577. Before him are Georg Michaelis, Chaghri Beg, Moctezuma I, B. J. Habibie, Mohamed Farrah Aidid, and Mentuhotep III. After him are Alfred Hugenberg, Mohammad Ali Shah Qajar, Günter Schabowski, Dương Văn Minh, Magnentius, and Felipe González.