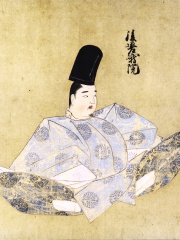 Emperor Go-Saga (後嵯峨天皇, Go-Saga-tennō, April 1, 1220 – March 17, 1272) was the 88th emperor of Japan, according to the traditional order of succession. This reign spanned the years 1242 through 1246.This 13th-century sovereign was named after the 8th-century Emperor Saga and go- (後), translates literally as "later"; and thus, he is sometimes called the "Later Emperor Saga". Read more on Wikipedia

Among politicians, Emperor Go-Saga ranks 5,082 out of 15,710. Before him are Matthias Gallas, Geoffrey II, Duke of Brittany, Emperor Go-Nara, Perdiccas I of Macedon, Prince Alfonso, Count of Caserta, and Anton Florian, Prince of Liechtenstein. After him are Armand-Augustin-Louis de Caulaincourt, Ariston of Sparta, Zhao Feiyan, James III of Majorca, Joseph Wenzel I, Prince of Liechtenstein, and Emperor Seiwa.

Among people born in 1220, Emperor Go-Saga ranks 10. Before him are Llywelyn ap Gruffudd, William of Rubruck, Brunetto Latini, Stefan Uroš I, Alphonse, Count of Poitiers, and Traidenis. After him are Ugolino della Gherardesca, Enzo of Sardinia, Rabban Bar Sauma, Joan, Countess of Toulouse, Jalal-ud-din Khalji, and Joan, Countess of Ponthieu. Among people deceased in 1272, Emperor Go-Saga ranks 5. Before him are Henry III of England, Stephen V of Hungary, Richard of Cornwall, and Zita. After him are Hugh IV, Duke of Burgundy, Enzo of Sardinia, Yaroslav of Tver, Bartholomeus Anglicus, and Henry IV, Duke of Brabant.