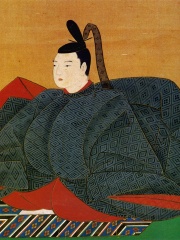 Emperor Go-Kōmyō (後光明天皇, Go-Kōmyō-tennō, April 20, 1633 – October 30, 1654) was the 110th emperor of Japan, according to the traditional order of succession.Go-Kōmyō's reign spanned the years from 1643 through 1654.This 17th-century sovereign was named after the 14th-century Nanboku-chō Emperor Kōmyō and go- (後), translates as later, and thus, he could be called the "Later Emperor Kōmyō". Read more on Wikipedia

Since 2007, the English Wikipedia page of Emperor Go-Kōmyō has received more than 113,348 page views. His biography is available in 28 different languages on Wikipedia making him the 2,499th most popular politician.

Among politicians, Emperor Go-Kōmyō ranks 2,482 out of 14,801. Before him are Infante Carlos, Count of Molina, Julius Nyerere, Rudolf I of Bohemia, Toghrul, Necho II, and Emperor Ming of Han. After him are Seleucus II Callinicus, Princess Birgitta of Sweden, Milton Obote, Berengar II of Italy, João Bernardo Vieira, and Christina of Lorraine.