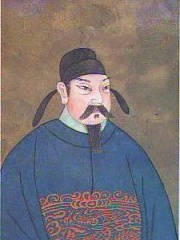 Emperor Daizong of Tang (9 January 727 – 10 June 779), personal name Li Yu (name changed in 758 after being created crown prince), né Li Chu (Chinese: 李俶), was an emperor of the Chinese Tang Dynasty. Emperor Daizong was the eldest son of Emperor Suzong – the first Emperor of the Tang dynasty to succeed as the eldest child, and during the Anshi Rebellion (which Emperor Suzong's entire reign was dedicated to fighting), he served as a general of Tang and Huige joint operations that recaptured the capital Chang'an and the eastern capital Luoyang from the rebel state of Yan, and the Anshi Rebellion was finally put down early in his own reign, in 763. However, thereafter, the Tang state was plagued by warlords such as Tian Chengsi, Li Baochen, and Liang Chongyi who essentially governed their realms as independent states while only pledging nominal loyalty to the emperor. Read more on Wikipedia

Since 2007, the English Wikipedia page of Emperor Daizong of Tang has received more than 132,802 page views. His biography is available in 19 different languages on Wikipedia making him the 2,919th most popular politician.

Page views of Emperor Daizong of Tangs by language

Among politicians, Emperor Daizong of Tang ranks 2,901 out of 14,801. Before him are Frederick Augustus II of Saxony, Nancy Pelosi, Joanna of Austria, Grand Duchess of Tuscany, Aspar, Eleanor of Navarre, and James Macpherson. After him are Francesco Cossiga, Argishti I of Urartu, Pekah, Gudrun Burwitz, Dionysius II of Syracuse, and Kilij Arslan II.