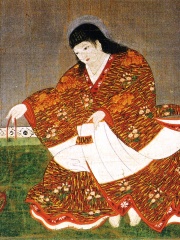 Emperor Antoku (安徳天皇 Antoku-tennō) (December 22, 1178 – April 25, 1185) was the 81st emperor of Japan, according to the traditional order of succession. His reign spanned the years from 1180 through 1185.During this time, the Imperial family was involved in a bitter struggle between warring clans. Minamoto no Yoritomo with his cousin Minamoto no Yoshinaka, led a force from the Minamoto clan against the Taira, who controlled the emperor. Read more on Wikipedia

Since 2007, the English Wikipedia page of Emperor Antoku has received more than 144,999 page views. His biography is available in 28 different languages on Wikipedia making him the 3,554th most popular politician.

Among politicians, Emperor Antoku ranks 3,532 out of 14,801. Before him are Urraca of Castile, Queen of Portugal, William V, Duke of Bavaria, Sibghatullah Mojaddedi, Aybak, Prince Paul of Yugoslavia, and Xanthippus. After him are Francis Walsingham, Peter I of Aragon and Pamplona, Empress Jitō, Peter I, Duke of Bourbon, Prince Arthur, Duke of Connaught and Strathearn, and Arame of Urartu.

Among people born in 1178, Emperor Antoku ranks 2. Before him is Suleyman Shah. After him are Thomas, Count of Savoy, Guillaume de Chartres, Armand de Périgord, and Theresa of Portugal, Queen of León. Among people deceased in 1185, Emperor Antoku ranks 8. Before him are Afonso I of Portugal, Chrétien de Troyes, Andronikos I Komnenos, Pope Lucius III, Bhāskara II, and Ibn Tufail. After him are Agnes of Courtenay, Richeza of Poland, Queen of Castile, Beatrice of Rethel, John Kinnamos, and Manuel Komnenos.