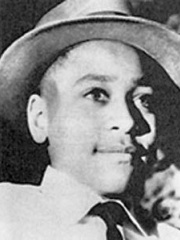 Emmett Louis Till (July 25, 1941 – August 28, 1955) was a 14-year-old African American who was lynched in Mississippi in 1955, after being accused of offending a white woman in her family's grocery store. The brutality of his murder and the fact that his killers were acquitted drew attention to the long history of violent persecution of African Americans in the United States. Till posthumously became an icon of the civil rights movement.Till was born and raised in Chicago, Illinois. Read more on Wikipedia

Since 2007, the English Wikipedia page of Emmett Till has received more than 11,304,194 page views. His biography is available in 23 different languages on Wikipedia making him the 270th most popular social activist.

Among social activists, Emmett Till ranks 269 out of 426. Before him are Leymah Gbowee, Mirzo Tursunzoda, Abbie Hoffman, Donald Watson, Gunnar Sønsteby, and Nimr al-Nimr. After him are Flora MacDonald, Udham Singh, Toyohiko Kagawa, Kate Sheppard, Louise Bryant, and Clara Barton.