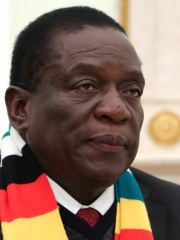 Emmerson Dambudzo Mnangagwa (IPA: [m̩.na.ˈᵑɡa.ɡwa], US: (listen); born 15 September 1942) is a Zimbabwean revolutionary and politician who has served as President of Zimbabwe since 24 November 2017. A member of ZANU–PF and a longtime ally of former President Robert Mugabe, he held a series of cabinet portfolios and was Mugabe's Vice-President until November 2017, when he was dismissed before coming to power in a coup d'état. Read more on Wikipedia

Since 2007, the English Wikipedia page of Emmerson Mnangagwa has received more than 1,549,661 page views. His biography is available in 51 different languages on Wikipedia making him the 3,406th most popular politician.

Among politicians, Emmerson Mnangagwa ranks 3,384 out of 14,801. Before him are Ladislaus III of Hungary, Rafael Caldera, Ferdinand II of León, Rob Roy MacGregor, Anne, Princess Royal and Princess of Orange, and Carlos Hugo, Duke of Parma. After him are Bretislav I, Henry II, Duke of Austria, Vladimír Mečiar, Ulrich von Jungingen, António, Prior of Crato, and Theudebert II.

Among POLITICIANS In Zimbabwe