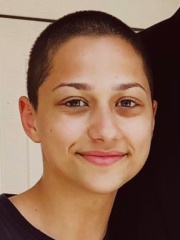 Emma González (born November 11, 1999) is an American activist and advocate for gun control. As a high school senior they survived the February 2018 Stoneman Douglas High School shooting in Parkland, Florida, and in response co-founded the gun-control advocacy group Never Again MSD.González gave a viral speech against gun violence, proclaiming "We call B.S." on the lack of action by politicians funded by the NRA. Subsequently, González continued to be an outspoken activist on gun control, making high-profile media appearances and helping organize the March for Our Lives. Read more on Wikipedia