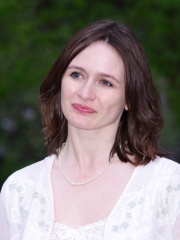 Emily Kathleen Anne Mortimer (born 6 October or 1 December 1971) is an English-American actress and screenwriter. She began acting in stage productions and has since appeared in several film and television roles. In 2003, she won an Independent Spirit Award for her performance in Lovely and Amazing. Read more on Wikipedia

Among actors, Emily Mortimer ranks 3,767 out of 10,030. Before her are Sam Heughan, Pauline Collins, Laura Innes, Dorothea Jordan, LeVar Burton, and Kirk Alyn. After her are Margarita Xirgu, Dina Meyer, Julie Dreyfus, Zhanna Prokhorenko, May Whitty, and Vadim Glowna.