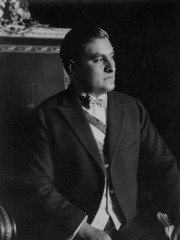 Emilio Cándido Portes Gil (Spanish pronunciation: [eˈmiljo ˈpoɾtes xil]; 3 October 1890 – 10 December 1978) was President of Mexico from 1928 to 1930, one of three to serve out the six-year term of President-elect General Álvaro Obregón, who had been assassinated in 1928. Since the Mexican Constitution of 1917 forbade re-election of a serving president, incumbent President Plutarco Elías Calles could not formally retain the presidency. Read more on Wikipedia

Among politicians, Emilio Portes Gil ranks 8,369 out of 15,710. Before him are King Gong of Zhou, Gagik I of Armenia, Archibald Primrose, 5th Earl of Rosebery, Taimur bin Feisal, Svante Nilsson, and Venceslau Brás. After him are Pavlos Kountouriotis, Wai Ren, Jahandar Shah, Alexandre Ribot, Julius Raab, and Kilij Arslan IV.