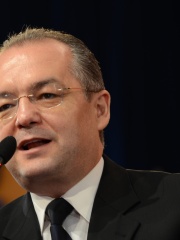 Emil Boc (Romanian pronunciation: [eˈmil ˈbok]; born 6 September 1966) is a Romanian politician who was Prime Minister of Romania from 22 December 2008 until 6 February 2012 and is the current Mayor of Cluj-Napoca, the largest city of Transylvania, where he was first elected in July 2004. Boc was also the president of the Democratic Liberal Party (PDL), which proposed and supported him as Prime Minister in late 2008, from December 2004 until July 2012. On 13 October 2009, his cabinet fell after losing a motion of no confidence in Parliament. Read more on Wikipedia

Among politicians, Emil Boc ranks 12,385 out of 15,710. Before him are Darius of Pontus, Nikolaos Kalogeropoulos, Shattuara, Salvador Jovellanos, Tryggvi Þórhallsson, and Marek Belka. After him are Laodice V, Luis Alberto Monge, Leonid Tibilov, Bulan, Vladimir Makogonov, and Henry Lee III.