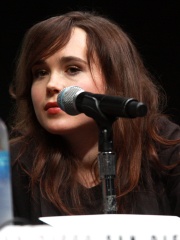 Elliot Page (formerly Ellen Page; born February 21, 1987) is a Canadian actor and producer. He has received various accolades, including an Oscar nomination, two BAFTA and Emmy nominations, and a Satellite Award. Page first came to recognition for his role in the television franchise Pit Pony (1997–2000), for which he was nominated for a Young Artist Award, and for his recurring roles in Trailer Park Boys (2002) and ReGenesis (2004). Read more on Wikipedia

The A.V. Club
Elliot Page was thrilled with The Umbrella Academy's trans story arc: "It was really special"
It wasn’t immediately clear how The Umbrella Academy would handle one of its star’s offscreen transition, but the third season returned with a loving, thoughtful arc that mirrored Elliot Page’s real-life experience. Speaking with The Hollywood Reporter, the a…
Mary Kate Carr
IndieWire
Elliot Page Praises ‘Umbrella Academy’ Trans Storyline: ‘We’re Not in Control of Our Stories a Lot of the Time’
Page and showrunner Steve Blackman were adamant that Viktor's gender identity is not "the main focus of the character," but they plan to keep exploring those themes in future seasons.
Christian Zilko
Towleroad
Elliot Page applauds Umbrella Academy’s transgender storyline
Published by BANG Showbiz English Elliot Page has applauded producers of his show ‘The Umbrella Academy’ for the way they handled the transgender storyline. The 35-year-old ‘Juno’ star came out as a trans man back in 2020 and his character on the Netflix hit,…
Towleroad
Buzzfeed
Elliot Page As Viktor On The New Season Of "The Umbrella Academy," And 15 Other Amazing Trans And Non-Binary Actors Who Play Trans And Non-Binary Characters
"We've always existed, and we've always existed everywhere."View Entire Post ›
Kelly Martinez