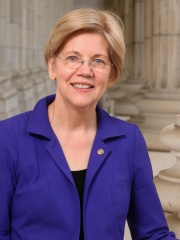 Elizabeth Ann Warren (née Herring; born June 22, 1949) is an American politician and former law professor who is the senior United States senator from Massachusetts, serving since 2013. A member of the Democratic Party and regarded as a progressive, Warren has focused on consumer protection, economic opportunity, and the social safety net while in the Senate. Read more on Wikipedia

Among politicians, Elizabeth Warren ranks 6,952 out of 15,710. Before her are Bonne of Artois, Junio Valerio Borghese, Tiberius Coruncanius, Afonso I, Duke of Braganza, Bohemond VI of Antioch, and Richard de Bures. After her are Warren Hastings, Fernando Belaúnde Terry, Nubkheperre Intef, Farrokhroo Parsa, Spencer Perceval, and Princess Frederica Amalia of Denmark.