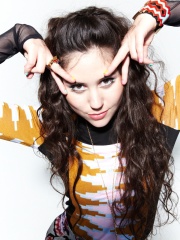 Eliza Sophie Caird (born 15 April 1988), better known by her stage name ELIZA (formerly Eliza Doolittle), is an English singer and songwriter from Westminster, London. After performing her music in live venues around London from the age of 15, Eliza signed to Parlophone in 2008.Her debut eponymous album was released on 12 July 2010 and went Platinum in the UK. The album, Eliza Doolittle, produced two UK top 40 hits: "Skinny Genes" and "Pack Up", the latter of which peaked within the top five on the UK Singles Chart.In 2013, Eliza contributed writing and vocals to "You & Me" a single from British electronic music duo Disclosure's number one debut album Settle.On 7 June 2013, she premiered a single called "Big When I Was Little", which was released in July 2013. It subsequently joined BBC Radio 1's and Radio 2 playlist. Read more on Wikipedia

Among singers, Eliza Doolittle ranks 3,359 out of 3,541. Before her are Jenifer Brening, Evdokia Kadi, Jay Rock, YG, Jon Walker, and Sunidhi Chauhan. After her are Bonnie McKee, Chance the Rapper, Cashis, Sarah McTernan, Nina Sublatti, and Stevan Faddy.