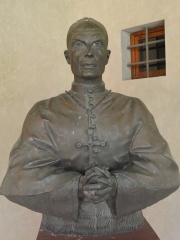 Elia Dalla Costa (14 May 1872 – 22 December 1961) was an Italian Roman Catholic prelate and cardinal who served as the Archbishop of Florence from 1931 until his death. Dalla Costa served as the Bishop of Padua from 1923 until 1931 when he was transferred to Florence; he was elevated to the cardinalate on 13 March 1933. Dalla Costa was a staunch anti-fascist and anti-communist and was known best for providing refuge for Jewish people during World War II and providing others with fake documentation to flee from persecution.Dalla Costa was noted for his deep faith and holiness and became a revered figure in Florence. Read more on Wikipedia

Among religious figures, Elia Dalla Costa ranks 1,541 out of 2,272. Before him are Swaminarayan, Coloman of Stockerau, Jón Ögmundsson, Agnes Baden-Powell, Luigi Poggi, and George Cruikshank. After him are Bernhard Lichtenberg, John X of Antioch, Virgilio Noè, Patriarch Theodore II of Alexandria, Phoebe, and Alessandro Albani.