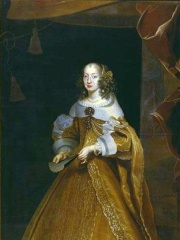 For other women of the same name, see Eleanor Gonzaga (disambiguation) Eleonora Gonzaga (18 November 1630 – 6 December 1686), was by birth Princess of Mantua, Nevers and Rethel from the Nevers branch of the House of Gonzaga and by marriage Holy Roman Empress, German Queen, Queen consort of Hungary and Bohemia. Nicknamed the Younger (de: Jüngere) to distinguish herself from her namesake grandaunt, she was considered one of the most educated and virtuous women of her time. Fascinated by religious poetry, she founded a literary academy and was also a patron of musical theater. Read more on Wikipedia

Among noblemen, Eleonora Gonzaga ranks 166 out of 843. Before her are Archduke Ludwig Viktor of Austria, Willem-Alexander of the Netherlands, Joanna Elisabeth of Holstein-Gottorp, Maria Anna of Bavaria, Archduchess Anna of Austria, and Raziye Sultan. After her are Prince Albert Victor, Duke of Clarence and Avondale, Frederick, Prince of Wales, Princess Marie of Hohenzollern-Sigmaringen, Rupprecht, Crown Prince of Bavaria, Duchess Mathilde Ludovika in Bavaria, and Nicholas Alexandrovich, Tsesarevich of Russia.