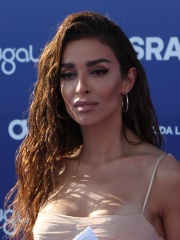 Eleni Foureira (Greek: Ελένη Φουρέιρα; born Entela Fureraj; 7 March 1987) is a Greek singer and dancer. She began her music career in 2007 as a member of the Greek girl group Mystique, before pursuing a solo career after the group disbanded in 2009. Foureira signed a solo contract with Universal Music Greece and released her self-titled debut album in 2010. Read more on Wikipedia