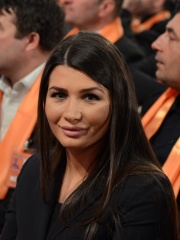 Elena Băsescu, sometimes referred to as EBA, (born 24 April 1980 in Constanța) is a Romanian politician, the former secretary general of the youth wing of Romania's Democratic Liberal Party, and a Member of the European Parliament between 2009 and 2014. She is the youngest daughter of Traian Băsescu, the former President of Romania. She was formerly a model, and entered politics in 2007. Read more on Wikipedia

Since 2007, the English Wikipedia page of Elena Băsescu has received more than 36,386 page views. Her biography is available in 17 different languages on Wikipedia making her the 14,136th most popular politician.