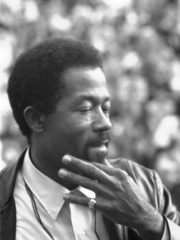 Leroy Eldridge Cleaver (August 31, 1935 – May 1, 1998) was an American writer and political activist who became an early leader of the Black Panther Party.In 1968, Cleaver wrote Soul on Ice, a collection of essays that, at the time of its publication, was praised by The New York Times Book Review as "brilliant and revealing". Cleaver stated in Soul on Ice: "If a man like Malcolm X could change and repudiate racism, if I myself and other former Muslims can change, if young whites can change, then there is hope for America."Cleaver went on to become a prominent member of the Black Panthers, having the titles Minister of Information and Head of the International Section of the Panthers, while a fugitive from the United States criminal justice system in Cuba and Algeria. Cleaver was convicted of a series of crimes including burglary, assault, rape, and attempted murder and eventually served time in Folsom and San Quentin prisons until being released on parole in 1968. Read more on Wikipedia