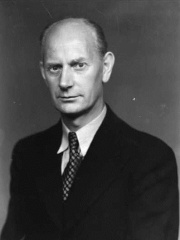 Einar Henry Gerhardsen (Einar Gerhardtsen.ogg ; 10 May 1897 – 19 September 1987) was a Norwegian politician from the Labour Party of Norway. He was the 22nd prime minister of Norway for three periods, 1945–1951, 1955–1963 and 1963–1965. With totally 17 years in office, he is the longest serving Prime Minister in Norway since the introduction of parliamentarism. Many Norwegians often refer to him as "Landsfaderen" (Father of the Nation); he is generally considered one of the main architects of the post-war rebuilding of Norway after World War II. Read more on Wikipedia

Among politicians, Einar Gerhardsen ranks 6,632 out of 15,710. Before him are Sergey Sazonov, Maximus of Hispania, William II, Count of Hainaut, Johann Nepomuk Karl, Prince of Liechtenstein, Otto I, Margrave of Brandenburg, and Tacfarinas. After him are Kaliman I of Bulgaria, Meinhard III, Count of Gorizia-Tyrol, Soong Ai-ling, Christian III, Count Palatine of Zweibrücken, Alexander Farnese, Prince of Parma, and Prince Oscar Bernadotte.