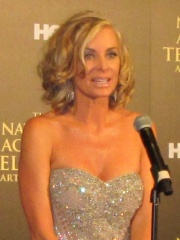 Eileen Marie Davidson is an American actress, author, television personality and former model. Davidson is best known for her roles in soap operas as Kristen DiMera and Susan Banks on NBC's Days of Our Lives and Ashley Abbott on CBS's The Young and the Restless and The Bold and the Beautiful. In 2014, Davidson was awarded a Daytime Emmy Award for Outstanding Lead Actress in a Drama Series for her role in Days of Our Lives.She was the second actress to win a Daytime Emmy Award in the category of "Lead Actress" for the soap; and in 2018 she won the award again for her role on The Young and the Restless.Davidson also starred in the film The House on Sorority Row (1983), had a leading role in the short-lived CBS crime series Broken Badges (1990–91), and wrote a number of mystery novels in the 2000s. Read more on Wikipedia