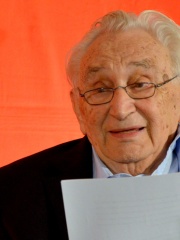 Egon Karl-Heinz Bahr (German pronunciation: [ˈeːɡɔn kaʁlˈhaɪnts ˈbaːɐ̯]; 18 March 1922 – 19 August 2015) was a German SPD politician.The former journalist was the creator of the Ostpolitik promoted by West German Chancellor Willy Brandt, for whom he served as Secretary of State in the German Chancellery from 1969 until 1972. Between 1972 and 1990 he was an MP in the Bundestag of the Federal Republic of Germany and from 1972 until 1976 was also a Minister of the Federal Government. Bahr was a key figure in multiple negotiation sessions between not only East and West Germany, but also West Germany and the Soviet Union. Read more on Wikipedia

Among politicians, Egon Bahr ranks 9,433 out of 15,710. Before him are Vladimir Bakarić, Alexander Mackenzie, Nicholas, Crown Prince of Montenegro, Viacheslav Chornovil, Phraates I, and Joan Beaufort, Queen of Scots. After him are Lucius Clodius Macer, Jamshid bin Abdullah of Zanzibar, Giovanni Galbaio, Lucius Cornelius Lentulus Crus, Mithridates V of Parthia, and Pasquale Cicogna.